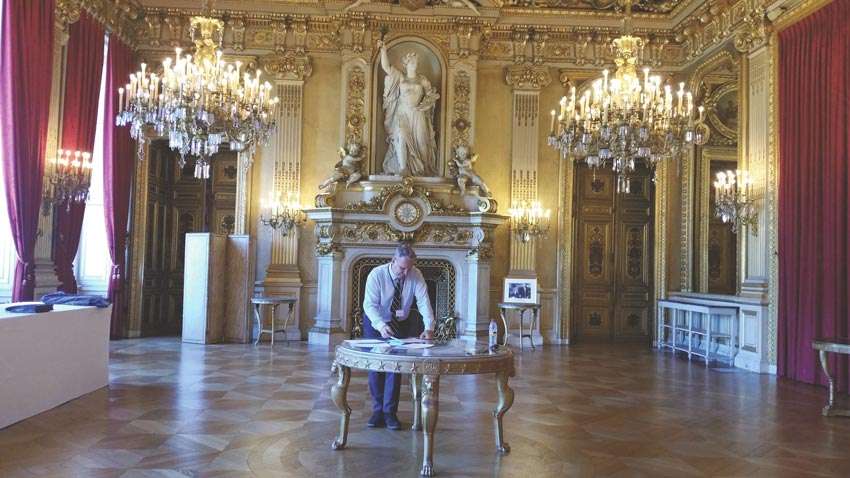 Whose Land? is a two-part documentary film looking at the legitimacy of the State of Israel in International Law. This unique documentary features in-depth interviews with a team of highly qualified lawyers and historians. It is presented by Colonel Richard Kemp CBE and produced and directed by multi-award winning filmmaker Hugh Kitson. 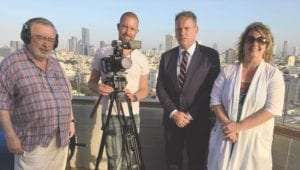 Part 1 of Whose Land? – entitled Foundations (94 minutes) – was released in Australia in August 2017 and in the UK, New Zealand and South Africa in November at the time of the 100th anniversary of the Balfour Declaration. It currently awaits release in the USA and Canada. It is available for live-streaming anywhere in the world through www.whoseland.tv

Foundations looks at both the history and the legal issues that led to the establishment of the modern State of Israel in 1948. Included is a demographic snapshot of the Holy Land in the 19th century. What historical records are there of a Palestinian Arab nation whose capital city was Jerusalem? We look at the roots of the modern Zionist movement, a detailed look at the Balfour Declaration and the Paris Peace Conference – and the relatively unknown agreement forged by Arab and Jewish leaders over their territorial aspirations in the former Ottoman Empire. The San Remo Resolution of 1920 established the legal foundation of four Arab States and the Jewish State in International Law. The film examines the White Paper of 1939, which was a violation of the legal obligations by the Mandatory power in Palestine. Our team of lawyers also look at the status of the UN General Assembly Resolution 181 of 29th November 1947 and what rights it gives to both the Jewish people and Arab people in International Law. Part 1 concludes with David Ben-Gurion’s Independence speech on 14th May 1948.

Part 2 – entitled Two State Solution? (similar in length to Part 1) – is planned for release in 2018. It is well advanced in its production, however additional filming is required. Off-line editing is currently being undertaken, but substantial funding is needed to complete the production.

Two State Solution? examines the Arab-Israel conflict from the establishment of Israel in 1948 to the present day. Our team of lawyers describe the Arab invasion to annihilate the Jewish state, which was politically and militarily backed by Britain, as illegal and a violation of the United Nations Charter – as well as being a complete betrayal of Britain’s legal obligations under the Mandate for Palestine. Jordan’s illegitimate occupation of ‘the West Bank’ and ‘East Jerusalem’ was never recognised by the UN or most of the other Arab states. Our lawyers apply legal principles, including the universal doctrine of International Law known as Uti Possidetis Juris – as well as those principles examined in Part 1 – to the rights of the Jewish people to claim sovereignty over all of Jerusalem, Judea and Samaria. They make a clear distinction between what is truly established in International Law and anti-Israel propaganda coming from the UN, the Islamic world and the Western media.

We will… expose the vile anti-Semitic propaganda coming out of the P.A. and its incitement to kill Jews. 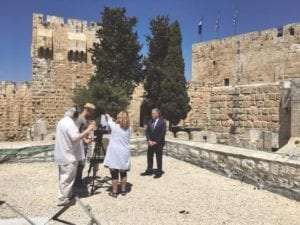 Photo: Hugh Kitson and his documentary film crew filming on location in the Old City of Jerusalem.

Since the release of Part 1 last year, a significant development took place in December – President Trump’s recognition of Jerusalem as Israel’s capital, and his announcement to move the US embassy to Jerusalem. The UN subsequently denounced the President’s announcement claiming it was incompatible with International Law. Is it? We plan to re-interview Dr Jacques Gauthier who is probably the world’s leading legal expert on this matter. We will also unmask the anti-Israel bias at the UN, and expose the vile anti-Semitic propaganda coming out of the Palestinian Authority and its incitement to kill Jews. We discover that ever since the ‘Oslo’ process began nearly 25 years ago, the ‘Palestinian’ people have suffered because of the corruption of their own leadership, as well as their refusal to reach a negotiated peace deal with Israel. Colonel Kemp will challenge the audience to truthfully answer the question as to whether the ‘Two State Solution’ will really bring peace to the troubled Middle East? Or will it bring about what those behind the BDS campaign are seeking – the dismembering of the Jewish state – and the possibility of another Holocaust?

Just as in the 1930s – the evidence is there and the writing is on the wall. 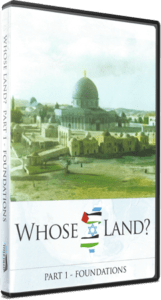 Do the Jewish people have historic and legal rights? If so, when and where did they originate?

Politicians, clerics and school teachers living in the Gaza strip, the West Bank and the Old City of Jerusalem, teach their young people the Balfour Declaration was illegal and the whole of the land – now known as Israel – in fact belongs to the Palestinians. In the two-part documentary ‘Whose Land?’ Colonel Richard Kemp CBE, together with a group of historians and international lawyers, examines the conflicting claims of the Palestinians and the Israelis through the eyes of verifiable history and international law.