US and Israel Quit UNESCO. Why? 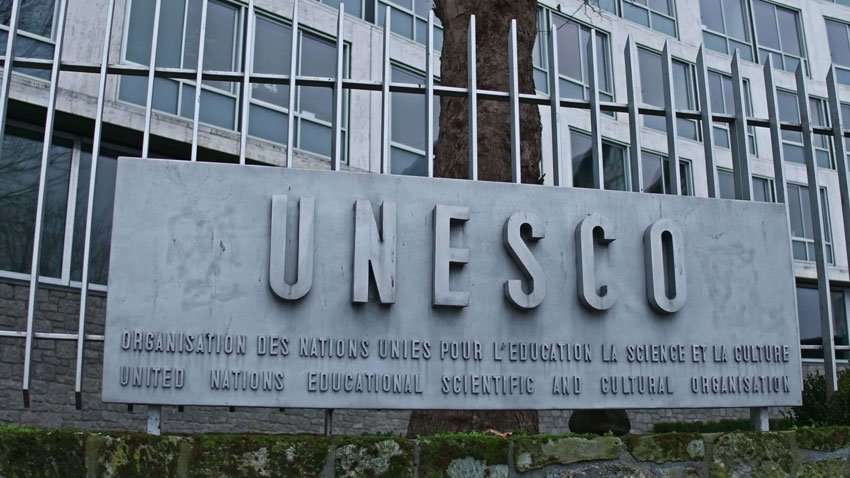 ‘Wipe Israel off the map’ has a serious agenda.

It is simple. Prove God is fictional! Prove His Word is not true. Words like:

‘“I will bring back My exiled people Israel; they will rebuild the ruined cities and live in them. They will plant vineyards and drink their wine; they will make gardens and eat their fruit. I will plant Israel in their own land never again to be uprooted from the land I have given them,” says the Lord your God.’ (Amos 9:14-15)

Notice the sentence highlighted. The agenda is to make sure this Word is actually false! Because God chose Israel Israel is the target!

The enemies of Israel say,

“Come, let us destroy them as a nation that the name of Israel be remembered no more.” (Psalm 83:4)

But Israel takes strength from Proverbs 19:21“Many are the plans in a man’s heart, but it is the Lord’s purpose that prevails.”

Last year the USA and Israel withdrew from UNESCO (the United Nations Educational, Scientific and Cultural Organization). A persistent volume of anti-Semitic attacks on Israel and the Jewish people escalated a call for action.

Ambassador Alan Baker Director of the Institute of Contemporary Affairs at the Jerusalem Centre spoke out. (Baker worked on the negotiation and drafting of the Oslo Accords with the Palestinian Authority). He wrote:

“On April 11, 2016, UNESCO adopted a decision, proposed by Algeria, Egypt, Lebanon, Morocco, Oman and Sudan, entitled “Occupied Palestine”. “The very title of this decision perhaps betrays and undermines what one should expect from an international body ostensibly dedicated to education, science and culture. The decision condemns all Israeli presence and activities in Jerusalem, Hebron and the tomb of Rachel. In so doing it pointedly and deliberately denies, ignores, and seeks to delete from history, any historic, cultural and religious link between the Jewish People, the Jewish religion and Jerusalem, including specifically its holy religious site of the Temple Mount and the Western Wall, the Machpela Cave in Hebron and Rachel’s tomb near Bethlehem.” (The Self-Destruction of UNESCO, Amb Alan Baker, JCPA Hot Topics, 20 April, 2016)

|
Our decision to vote against reflects Australia’s strong concern that consideration of Palestinian membership in UNESCO is premature...

A year after that report, the Trump administration filed notice to withdraw from UNESCO citing the need for ‘fundamental reform’. Anti-Israel bias was a major concern for the Americans. (Previously, the US withdrew during the Reagan administration, citing mismanagement, corruption and excessive Soviet influence. They rejoined in 2003).

On their recent withdrawal, Heather Nauert, US State Department spokesperson in a 2017 statement said,

“This decision was not taken lightly. It reflects US concerns with mounting arrears at UNESCO, the need for fundamental reforms in the organization, and continuing anti-Israel bias.”

The US withdrawal came into effect December 31, 2018. They now maintain an observer status to engage in debates and activities without the right to vote.

On her last day as US Ambassador to the UN Nikki Haley was very direct.

“UNESCO is among the most corrupt and politically biased UN agencies. Today the U.S. withdrawal from this cesspool became official.” (Hard to misunderstand her words!)

The United Nations and its UNESCO operation has become an anti-Semitic enigma. In 1942 Europe was the battleground for Hitler and his Nazis. Representatives of European countries met in the UK at the Conference of Allied Ministers of Education (CAME). Although they were in the midst of war, they met to consider systems of education to be implemented when peace was restored. This was the United Nations embryo. Other conferences followed. One was convened in London in November, 1945. After this, thirty seven countries founded the United Nations Educational, Scientific and Cultural Organization (UNESCO). Founded immediately after the unspeakable Nazi abuse and in the bitter memory of the Holocaust, it is staggering to consider recent UNESCO actions.

Israel joined UNESCO in 1949 but was expelled in 1974 because of excavations carried out on the Temple Mount. Five years later Israel was returned after America threatened to withdraw funding over the situation.

The anti-Israel decisions stepped up. In 2010 UNESCO determined Rachel’s Tomb was a mosque. They ordered Israel to remove the site and the Tomb of the Patriarchs from their list of national heritage sites.

In October 2011 the Palestinian Authority was accepted as a full member. In 2015 UNESCO called for Rachel’s Tomb and the Tomb of the Patriarchs to be part of ‘Palestine’ and to be listed as sacred Islamic sites. “The theatre of the absurd continues,” boomed Netanyahu.

As the USA prepared to withdraw from UNESCO State Department spokes person Heather Nauert offered a shopping list of grievances. The unconstitutional acceptance of the Palestinians in 2017 propelled the move. UNESCO condemned Israel multiple times. Other groups and their behaviour were ignored.

“We don’t recognize the state of ‘Palestine.’ We have consistently across Democratic and Republican administrations opposed the admission of ‘Palestine’ to the United Nations as a state, because it’s not a state.”

“Our decision to vote against reflects Australia’s strong concern that consideration of Palestinian membership in UNESCO is premature,” said Ms Gita Kamath Australia’s Head of Mission.

“The UN, begun as a moral force, has become a moral farce. So when it comes to Israel at the UN, you’d probably think nothing will ever change, right? Well think again. You see, everything will change and a lot sooner than you think,” he promised.

Israel announced it would follow the US decision to withdraw from UNESCO (2017).

“UNESCO has become a battlefield for Israel-bashing and has disregarded its true role and purpose. Today’s decision is a turning point for UNESCO,” Netanyahu said in a statement.

Stefan Simon Director of Global Heritage Initiatives at Yale’s Institute for the Preservation of Cultural Heritage (IPCH) called the US withdrawal ‘irresponsible’ and ‘very short-sighted’. He acknowledged US concern with the embrace of ‘Palestine’ but added ‘You can’t just drop your toys and run away!’

Brian Daniels, the director of research and programmes for the Penn Cultural Heritage Centre at the University of Pennsylvania Museum summed up the future pessimistically. “I see it limping along,’ he said. “These kind of agencies die hard.”

Ron Ross resigned his TV career to attend Bible College. His life has been dedicated to missions and ministry. After 9 years as pastor at Noosa Baptist Church, Ron and his wife Yvonne moved to Jerusalem. He broadcast news from Israel and the Middle East to Christian networks around the world. He continues to broadcast Israel and Middle East news for Vision Christian Radio on Tuesdays.