The “New Thing” God is Doing With Jews and Christians 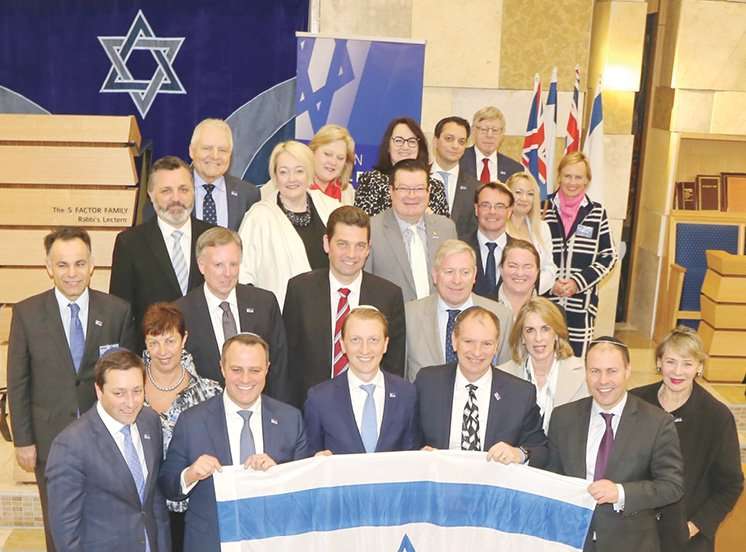 The founding Patrons of the Young Liberals were joined at the official launch by Treasurer Josh Frydenberg, Matthew Guy and over a dozen Victorian Liberal MPs at the Central Shule Chabad in Caulfield in 2018. An example of both Jewish and Christian Zionist cooperation.|

It’s a MIRACLE and a MYSTERY!! A miracle because after nearly 2000 years of the most vile and heinous persecution and murder of Jewish people by people bearing Christ’s name, Jewish people actually want to relate to Christians! A mystery, because in this new relationship there is a sense of oneness and family, even though there are fundamental differences in our beliefs!

If any Christian is unfamiliar with our dire history with Jewish people I would encourage you to read Dr Michael Brown’s book “Our Hands Are Stained with Blood” or watch Frontier Alliance’s films “Covenant and Controversy” or “Let The Lion Roar” by Vanessa Frank. There are many other resources available, including a 45 page A4 “List of Atrocities” that Root Source has compiled www.root-source.com/blog/9av-resources-post Many Christians world wide are now working through this list, but our history with the Jewish people is so appalling and grievous that one is soon overcome with sorrow and tears of repentance.

As Rabbi Shmueley Boteach says in his book “Kosher Jesus”;

“…the very name Jesus reminded me of the suffering laid upon Jewish communities for two thousand years: persecutions, forced conversions, expulsions, inquisitions, false accusations, degradations, economic exile, taxation, pogroms, stereotyping, ghettoization and systematic extermination. All this incomprehensible violence and cruelty against us, … committed in the name of a Jew…”

…meaning Jesus. As many would know, the words “You killed our Christ we will kill you” were written over the entrance to one of Hitler’s concentration camps. What a deception on our part.

So what a miracle that in the last three decades, Jewish people are allowing Christians to partner with them in “building up Zion” and in “hastening the day” of the Messiah’s appearance. In light of the above history, where Christ has been so misrepresented, it is surely imperative that we come into this new relationship with Jews in the purest of love and humility and a willingness to serve. However, I believe it is also imperative that our new relationship be built on mutual respect for each other’s faith and that we come to the relationship with no hidden agendas.

|
...in the last three decades, Jewish people are allowing Christians to partner with them...

We are living in an era where 3000-year-old prophecies are being fulfilled before our very eyes. The State of Israel has been reborn; Jewish people are returning from the four corners of the earth; the desert is blooming; vineyards are once more being planted on the mountains of Israel. In Ezekiel 36, God says 18 times, “I WILL DO THIS” and in Jeremiah 32:41 He says “Yes I will rejoice over them to do them good and I will assuredly plant them in this land with all My heart and with all My soul.” And He is surely doing this!! (Note this is the only time in the Bible that God says He will do something with all His heart and soul!!).

Our job is surely to “Comfort ye, Comfort My people!” as Isaiah says (40:1). In the New Testament we are told (Romans 9-11) that we are in debt to the Jews because of all the spiritual blessings we have received from them. And in Romans 15:27 we are instructed to minister to the Jews in material things as a result of this debt.

I have been connected to Christian Friends of Israeli Communities for many years and recently agreed to serve as this organization’s Australian representative. I chose CFOIC Heartland because their message is so critical and because all funds raised make such a difference in the lives of the residents of Judea and Samaria who are “settling” the land as God has commanded them.

It is such a comfort to the people of Judea and Samaria to know, especially when there is tension or tragedy, that there are Christians around the world who love them and stand with them as they assert their God- given right to the Land. What an amazing way to express the change in our relationship with the Jewish people and to participate in the miracle of this change as it is unfolding before our very eyes!

Sondra Oster Baras (pictured right), director of the Israel office of CFOIC Heartland, is an Orthodox Jew who has devoted the past 21 years of her life to building relationships with Christians in support of her people and the Land of Israel. And Sondra is my dear friend. And this is what CFOIC Heartland is all about—Christians and Jews, sharing leadership and working together in one organization to partner in what God is doing in Israel.

If you are already involved in CFOIC Heartland, I would love to hear from you and get to know you. Perhaps you want to join the tour I am leading this September with Stan Goodenough as our Guide – a one of a kind experience in the Land of Israel. If you do please email me for the Itinerary on joyhey50@gmail.com. IT IS NOT TOO LATE TO JOIN. And if you are not already connected to CFOIC Heartland or if your involvement is peripheral, I want to invite you to take the plunge and become a true partner. Contact me! There is no better way to take part in the fulfilment of prophecy!

← Tisha B’Av – The Saddest Day The ‘Horror of Poland’, the ‘Catastrophe of Ukraine’ and the ‘Hope of Israel’ →