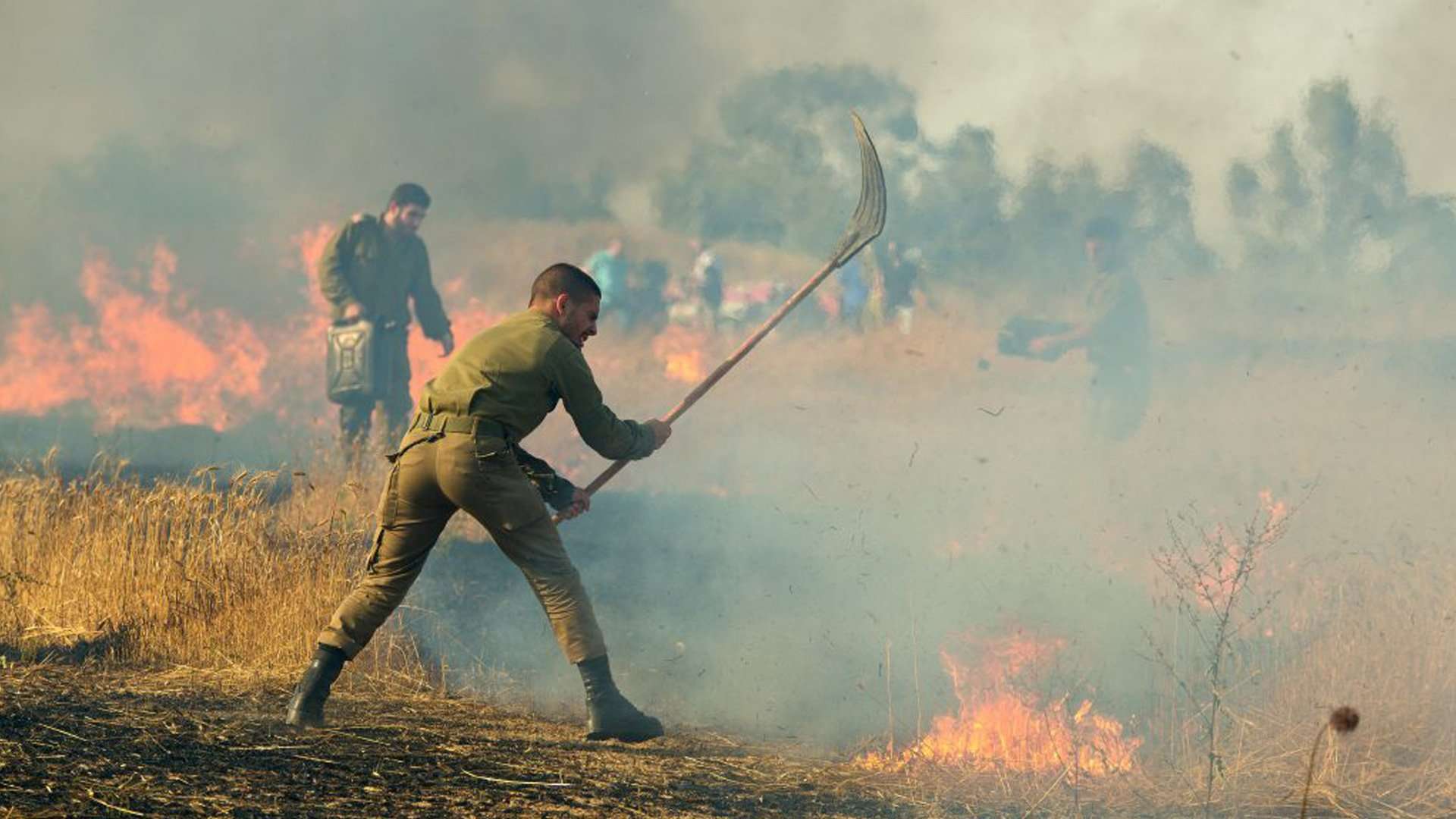 I knew Tim Wainwright and his father Chris as distant acquaintances via work related matters. Tim is a professional fire fighter and the Director of Fire Safety and Training Fire Support NSW. Chris serves the Australian Defence Force as the Sydney Team Leader in the Everyman’s Welfare Service, specifically serving in philanthropic areas during fire and other crises in which the ADF is engaged.

In 2013 a terrible fire tore through the Blue Mountains town of Winmalee, leaving 200 families homeless. As this town was very close to my home I prepared to leave to spend time with my family nearer Sydney. As I was backing out of my driveway with mixed feelings of leaving my home, my mobile phone rang. It was Chris Wainwright advising me that he and Tim were on their way up to the Mountains as “God had told them to come to defend my home!” I was both amazed and overjoyed at this revelation. What a literal God-send. 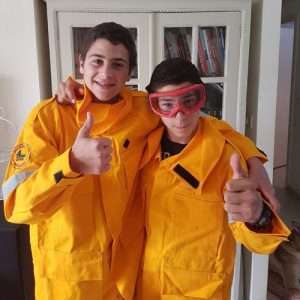 Photo, supplied by Tim Wainwright, of two Israeli boys demonstrating their delight
with the fire jackets and equipment gifted to them.

I moved out and these two men of God moved in to my home to defend it, should it come to that. They stayed for a week during which they had opportunities to share the Gospel with other fire-fighters and emergency service personnel over cups of coffee they had prepared from their “brew truck”, during changes of shift. The fire did not come my way on that occasion but it gave me such a sense of the Lord’s protection and care for His own.

In the same way, God is watching over Israel and placing in the hearts of men and women an increased longing to become involved. As God brings His people home from the Diaspora, He continues to ‘lift His banner to the gentiles’ to assist His sovereign work in bringing comfort and practical support to His still-chosen people. God calls to us in the “far off isle of Australia”, inviting us to take part in His magnificent, unstoppable plans; “Hear the word of the LORD, O nations, And declare it in the isles afar off, and say, ‘He who scattered Israel will gather him, And keep him as a shepherd does his flock.’” (Jeremiah 31:10).

The next time I met Tim Wainwright was in Israel in March 2019. I had led my tour group to Poland and Ukraine and we were then travelling through Israel specifically visiting Christians for Israel projects. We were in Beersheba and separately visiting the new Light Horse Museum at what was obviously God’s perfect timing. Tim told me that he was there to assist Israelis, specifically with training in how to fight the fires that had started in their fields by fire balloons and incendiary kites released from Gaza by Hamas-backed terrorists. These vicious devices, hidden in brightly coloured balloons to attract Israeli children, were creating terror and wreaking havoc on farmers’ crops. The hot dry conditions were very similar to Australia’s bushfire seasons and Tim felt the call of God to share his skills with the Israelis.

Tim was extremely concerned at how ill-prepared the Israeli civilians were in fighting fires and he longs to go back this year, but requires funding. He lists some of his concerns as follows:

Tim was sponsored last year by ICEJ Australia to train and equip Israelis in the southern regions of Israel and went on to train many heads of security and responders as well as the youth at Kfar Silver school. Whilst the Israelis continue to be supported by ICEJ donated fire trucks and other equipment, Tim was alarmed to see how unprepared the Israelis were for fighting this type of terrorism because of the lack of skills required. The IDF is among the best prepared in the world for battle but they had to leave this type of fight to non-professionals.

At my invitation Tim spoke of his visit to Israel, with Dan Steege of the ICEJ Australia, at a Christian Worldview Forum in the NSW Parliament House, Sydney. Both men told of the horrific battle being waged by Hamas-inspired terrorists in Gaza upon the Israeli communities, communities which also continue to be assaulted by rockets fired from Gaza in addition to incendiary kites and balloons.

Tim believes the coming summer will see dangerous conditions return as Hamas continues to use hate-infused riots to stage confrontations with Israeli troops and to hurl incendiary devices from Gaza upon Israel.

As Christians we are not all called to travel to Israel in such dramatic ways, however we are all called to comfort, to love God’s people and to respond in any way the Lord speaks into our hearts. Gentiles have been given specific Scriptural directives regarding God’s expectation for them to reach out to their older Jewish brethren, particularly comforting and assisting them home to Israel and then to support them as they rebuild towns and cities and make the land blossom, under Almighty God’s hand. Tim is specifically praying for the means to establish a fire support body to assist Israelis to become proficient in the type of protection in which he has expertise. Israel is being hampered by the enemy as they seek to once again plant their vines on the mountains of Samaria as God prepares the land for Messiah’s coming. Not all can go into the field but all can pray for equipping and blessing for those who can go. Will you join Tim in prayer?