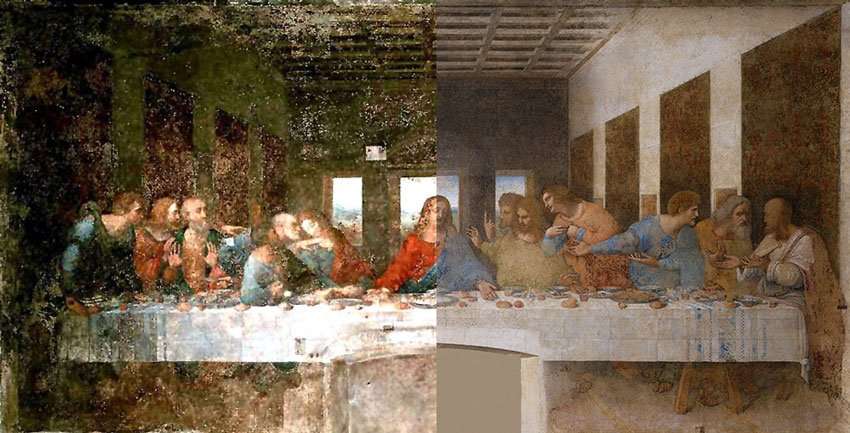 The early official church was seriously remiss for expunging the Jewish/Hebrew foundations of the Christian faith because of anti-Semitic bigotry.

This has resulted in great loss for both the Jewish people and the Christian church. Context and culture are incredibly important for understanding the Bible correctly.

Leonardo da Vinci’s ‘Last Supper’ was painted in 1498 and over half a millennia later it was in terrible condition. Some paint was flaking, it was damaged from pollution and humidity, it was in such disrepair that in 1977, Pinin Barcilon was tasked with restoring the masterpiece.

She had 500 years worth of dust, grime, deterioration, mold, candle soot and several appalling attempts at restoration from the 1700’s. Heavy coats of varnish, glue and poor efforts by painters filling in the gaps with their own interpretations, needed to be removed.

Every square inch of the painting was photographed, and months of preparation work undertaken before it was even touched. Once the work commenced, a good day may have revealed a section the size of a postage stamp, it took 22 years to restore the ‘Last Supper’, finishing in 1999.

|
Some things will absolutely be very different but hey, the goal is to know truth.

The essence of the scene was unchanged but the gloomy shadows were gone, Andrew was no longer sullen, Jesus’s face glowed, Matthew had blond hair not black, Peter’s beard and nose were properly clear, Thomas had his left hand restored and the vibrant colours of the master were finally revealed after being hidden for centuries. The before and after photos online show the difference the restorers made.

It was the same picture but with far greater clarity and vibrancy.

I use this example to make my point about the Hebrew foundations of Christianity. The Bible is Jewish, the words contained in it come from Jewish thought, mind and cultural contexts. The language of the Bible (OT) is Hebrew, the prophets were Jews, the Apostles were Jews and our Messiah, Jesus, was and remains a Jew. If you want to understand the words of Jewish prophets, kings, priests, Apostles and the Messiah Himself, then you need to understand Jewish/Hebrew culture and custom, and the environment in which those words and events took place.

The picture you already have won’t necessarily change, but the details, clarity, significance and the message will absolutely take on greater meaning and depth. Some things will absolutely be very different but hey, the goal is to know truth.

‘Israel & Christian’s Today’ is going to feature articles that focus on the Hebrew foundations of our Christian faith and our hope is that they’ll enrich your life and reignite your passion for Scripture.

Mandy is an author, radio presenter and regular tour host to Israel, Jordan and Turkey along with her husband Ian Worby. You can hear her weeknights on Vision Christian Radio.