A Brief History of Jews in Australia 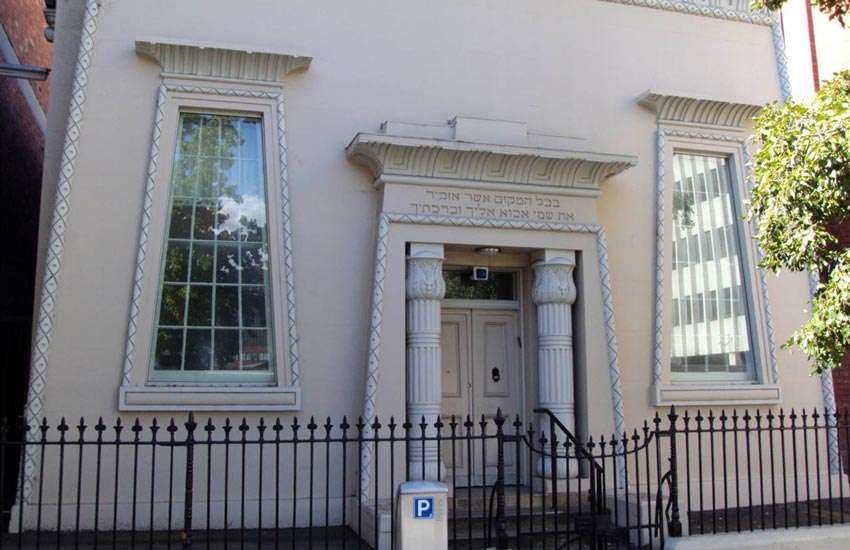 The first Jews in Australia came literally on the first day of European settlement on the continent – 26 January 1788. Among the 827 convicts on the English First Fleet who began Australia’s European settlement was a small number of Jewish convicts, estimated by historians at between eight and 14, transported from England to Botany Bay, near Sydney, for relatively trivial crimes. The first free Jewish settler to arrive in Australia, however, came in 1816. The first Jewish religious society in Australia, a burial society, began in 1817 and the first Jewish religious service took place about the same time.

The Great Synagogue, Sydney, constructed in 1878.

Organised Jewish religious life in Australia began in the 1830s in Sydney, with the formation of the first permanent congregation. The first synagogue, Beth Tephilah, was established in 1837. Hobart Synagogue was the second to be built in 1845 and is the oldest synagogue still in use in Australia—and the southern hemisphere—home to the Hobart Hebrew Congregation.

These Central and East European Jews differed markedly in their outlook from the largely Anglo-Jewish community which they found on their arrival. Most spoke Yiddish, Polish, German or Hungarian.

In contrast to many non-Zionist Australian Jews of British background, the newcomers were keenly Zionist in orientation and strongly supported the establishment of Israel in 1948 and since. From the 1940s, too, substantial numbers of Sephardi Jews, especially from Egypt, have settled in Australia (particularly in Adelaide) as have, more recently, thousands of Jews from Southern Africa and the former Soviet Union.

As a result, the Australian Jewish community grew markedly and developed a flourishing range of communal institutions previously unknown. Australian synagogues grew in number from about a dozen in the 1930s to over 80 today, representing nearly all streams in contemporary Jewish religious life from Adass Yisroel and Chassidic to Progressive Judaism. The most important institution developed by the newcomers, however, has been the network of Jewish day schools, now numbering more than 20, which in some respects is without parallel in the diaspora.

Over 75 percent of Melbourne’s Primary Jewish school children and over 50% of the city’s secondary school students now attend a Jewish day school. Melbourne’s Mount Scopus Memorial College, which takes students from pre-schoolers to high school seniors, is one of the largest Jewish day schools in the diaspora, with an enrolment of almost 2,000.

The great majority of Australia’s Jewish population (approx. 100,000) lives in Melbourne and Sydney, Australia’s two largest cities, with only Western Australia of the other states having as many as about 8,000 Jews. (However, there are established Jewish communities in all major cities in Australia.)

It is often said that the ambience of the two communities is different, with the Melbourne community (approx. 50,000) primarily of Polish background, being more conservative, and the Sydney community, with relatively more Hungarian and German Jews, being more liberal. In both Melbourne and Sydney, there are distinctly Jewish areas where many (though certainly not all) Jews live and where most Jewish synagogues and other institutions may be found.

In Melbourne, about 75 percent of the Jewish community lives south of the Yarra River in a belt running from South Yarra and Toorak to Moorabbin and Glen Iris, and centering in Caulfield and St. Kilda.

“[Australia] is said to have the highest percentage of Holocaust survivors… in the world.”

Another distinctive feature of Melbourne life (much more so than of other Jewish communities) is the amount of Yiddish still spoken by the Jewish community. Many older Jews still prefer to speak Yiddish. There is also a Yiddish school and Yiddish theatre in Melbourne.

The Jewish community of Sydney is more spread out than in Melbourne. The traditional centre of Jewish life in Sydney is in the eastern bay and beach suburbs from Double Bay through Woollahra to Bondi, although these areas are not as distinctively ‘Jewish’ as their equivalents in Melbourne. Bondi contains a number of Jewish shops and the principally-Jewish Hakoah Club.

Many Jews also live in the northern suburbs to the north of Sydney Harbour, known as the North Shore, which has a strong Southern African Jewish ex-patriate presence.

There are no distinctively Jewish areas in other Australian cities. However, many Jews in Perth live in Yokine, Dianella West and Noranda which, like Sydney’s North Shore and Melbourne’s Doncaster, is home to large numbers of South African and Zimbabwean Jewish migrants.

The input of Jewish born members of Australian society is very significant in all areas of life. Scientific, Professionals, Legal, Medical, Artistic, Musical and Military are just some of the distinguished contributors.

Two of the most well known public figures were Sir Isaac Isaacs (left) who was the first Australian born Governor General of Australia and was the first Jewish vice-regal representative in the British Empire.

Sir John Monash (right) who was one of the most distinguished Allied commanders of the Western Front during World War I, after whom Monash University and Monash Freeway are named.

The Mark and Dinah Munzer Community Centre in Caulfield.

Marg and I became involved with this centre about 17 years ago and often times brought teams of singers, dancers and timbrelists to Sunday afternoon concerts for the aging residents and their families. We were always warmly received by them and we pay particular tribute to Sylvia Drever who has been a most welcoming host and organiser of these special events….a special friend.

Unfortunately, the centre is about to close as in recent times there have not been enough residents to support it. Many of the residents over the years have been holocaust survivors from Europe and in more recent times the child survivors but as the number of WW2 survivors dwindles, so do the numbers requiring such aged care.

Our prayers are with the remaining residents as the centre was closed in February as the property has been sold.

We pay tribute to all who have played a part in the establishment and running of this great home and to so many aging Jewish folk who experienced first hand some of the most terrible atrocities and inhumanities known to man during WW2.

We also thank all of those Christian folk and members of our own family who have worked with us over the years to bring a meaningful presentation in music, singing, timbrel and dance on many Sunday afternoons.

“The LORD has appeared of old to me, saying: “Yes, I have loved you with an everlasting love; Therefore with lovingkindness I have drawn you. Again I will build you, and you shall be rebuilt, O virgin of Israel! You shall again be adorned with your tambourines, And shall go forth in the dances of those who rejoice…” – Jeremiah 31:3-4NKJV

Paul Longfield & his wife Marg are available to conduct Sabbath evenings and Seminars, on behalf of King of Kings International Ministries, teaching on Passover & the Festivals at your church or fellowship on request.