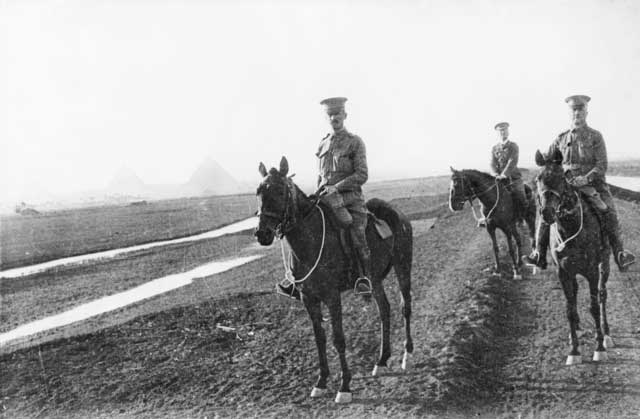 World War One & the German-Turkish alliance

When War broke out in August 1914 Germany and Ottoman Turkey had already entered into a secret agreement. Britain was now reluctantly forced into conflict against the Turks. The area of greatest strategic and military importance was the Suez Canal. Everything needed to be done to preserve the link to the eastern empire. Indeed already at that stage strategists were looking to the post-War period, and what would be best for Britain and this link. One Jewish parliamentarian, Herbert Samuel proposed in 1914-5 that Britain should take control over ‘Palestine’ and permit the establishment there of a Jewish national entity.

From March 1915 a two-fold movement began which climaxed on 31 October 1917. The first was military, and began on the shores of Gallipoli. This campaign ended in failure, and resulted in Turkey planning for the capture of the Suez Canal. Britain’s goal was to protect the Canal, and the most effective method was by creating a buffer zone up to the Sinai-Palestine border.

The second movement was political, and resulted from a Russian demand in March 1915 that following victory at Gallipoli and once Constantinople fell, then Russia would gain the region connecting the Black Sea and Mediterranean for herself. Britain also realised that if Turkey was defeated, then France would claim Syria, including Palestine. Britain needed thereupon to ensure the security of her link through to India and the East and discussions then began with the French, and the Arab nationalist movement, concerning the future of Turkey in Asia.

Britain’s political and military strategy changed in late 1916 when David Lloyd George became prime minister and Arthur Balfour became the foreign secretary. Their policy included the capture of all of Syria, including Palestine. The future of this strategic land was now of prime importance.

Following two defeats at Gaza in early 1917, the key battle for the conquest of Turkish Palestine was to be at Beersheba—the town associated with Abraham, the man to whom God Almighty bequeathed the land of Israel through a covenant oath. ‘Z Day’ was scheduled for 31 October. The bulk of the fighting this day was to be undertaken by British infantry, and according to the plan of General Allenby, the actual taking of the town was entrusted to the Desert Mounted Corps.

By midday the British infantry had achieved all of the stated goals­—while the mounted troops were behind schedule. On that same day, at some time probably around midday, the members of the British War Cabinet began to assemble in Whitehall London. One of the items on the agenda that day was entitled, ‘The Zionist Movement’.

In Beersheba progress was slow on the eastern flank, as the domineering Tel el Saba (ancient Beersheba) was not captured. But then at about 3pm, the New Zealanders finally subdued this strategic position. Time was running out and General Chauvel commanded the 4th Australian Light Horse Brigade to complete the capture of the town by a frontal attack – a charge.

At about this time the men in London, nine of whom had some form of Protestant Christian background (and thereby some Biblical knowledge), began the discussion concerning the Zionist proposal for a national home in Palestine. Interestingly many of the men fighting that day, British, Anzac and German, would have carried around a small Bible with them, a legacy of the Reformation, which officially began exactly four hundred previous.

In Beersheba the Australian Light Horse successfully completed their famous charge, and by about 6pm, Beersheba was in Allied hands. This victory was achieved by a combined British, New Zealand and Australian effort.

Almost simultaneously the War Cabinet in London voted in favour of endorsing the Zionist proposal, and promised the establishment of a Jewish national home in Palestine. There can be little doubt that pragmatic geo-politics to the side, their decision was influenced by what the Bible stated about the Jewish people, and their God-given rights to dwell in the land of Israel.

Did God ordain that these two events would occur on the same day in 1917—the same day as the other events in 1517 and 1898? I really do not know, but what I can say is that all of these four events were connected.

For instance, had there been no Reformation, then it is highly unlikely that the members of the British War Cabinet would have been favourable to a Jewish restoration to the land of Israel. Additionally, had Germany and Turkey not been aligned as they were from 1898 onwards and especially so in the First World War, there would have been no just cause for British and Anzac forces to be at Beersheba—and no possibility for a Balfour Declaration!

How then can we Christians look upon this day?

Perhaps it is a time to acknowledge the Sovereignty and grace of God. His sovereignty in that all things work together for His ultimate purposes. God has a plan for the redemption of the world through Jesus, and central to this plan is the fulfilment of His covenant oaths regarding the people and the land of Israel. Additionally, He has His set ways for how this plan will be out-worked, and He has ordained it that certain nations would play certain roles at certain times – in this instance on or about 31 October.

Additionally, the out-working of this plan is all by His grace and not by anyone’s works, so that no-one can boast. It is, I would suggest, in this ‘spirit’ that we should enter when we celebrate or commemorate these events in Wittenberg, Jerusalem, London or Beersheba in October and November 2017.

Note: The subject matter in this article will be part of a documentary and booklet entitled ’31 October – Destiny’s Date?’ to be released during 2017.

Today many individuals, institutions and even nations are endeavouring to delegitimise the right for the nation of Israel to exist in the land of Israel.

Additionally there are many in the world who are attempting to deny the actual existence or true identity or mission of Jesus of Nazareth. The existence and legitimacy of both entities, Israel and Jesus, stand upon the very same foundation and principle – the purposes of God Almighty as confirmed through the swearing of a covenant oath. Oaths are a reflection of the character of the one who swore them. The character of God Almighty is much dependent, therefore, upon whether He keeps or breaks the oaths which He has sworn.

The author, Kelvin Crombie came to ‘know’ Jesus as a result of being in Israel, and he lived there for some twenty-four years. This book, based upon a previous publication In Covenant with Jesus, reveals his desire to present an understanding of the relationship between Israel and the Church; Israel and the nations.